You are here: Home / Blogposts of Yesteryear / Robotics for Kids Taught by TedX Speaker

On September 28 in a little corner of Riverside near the railroad tracks, a very special class took place.  A handful of homeschoolers got their first introduction to robotics.

McCombs, 27, is a graduate of UNF in mechanical engineering.  He now runs Renaissance Jax, a non-profit dedicated to STEAM (Science, Technology,Engineering, Art and Math) education of kids and teens.

Many local public schools are involved in this effort.   McCombs has even received some financial backing from Gary Chartrand From the Florida Board of Education and internships from Vistakon, a contact lens manufacturer, to assist in his effort in the public schools.

McCombs’ vision is to put a robotics team in every school in Jacksonville.

But McCombs wants to encourage ALL children, not just those in public school,to try to learn all they can about robotics.  Which is why he agreed to lead this class. 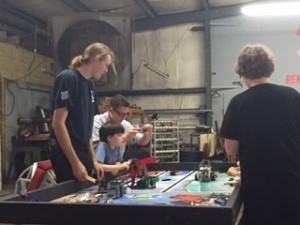 The workshop Danny and Ricky attended was based on the  First Robotics Lego League competition for 2015-16, Trash Trek, which involves concepts of recycling and green technology.

Since the 9-3 introductory session was not long enough to include designing a robot, the homeschool group worked with pre-designed fully assembled robots.  McCombs introduced them to the various tasks in the Trash Trek challenge and had each two-person  team program their robot to do one of the tasks.

The kids modified their robots and plugged them into a laptop to program them.  The software uses a simplified “block” programming system, similar to Scratch, where selecting a single “block” tells the robot to move a certain way.

Ricky’s main complaint about the workshop was, “There wasn’t any code!” At 13, he is older  than most of the participants and fairly computer savvy.  But as the kids advance in age in the robotics program, the code also becomes more advanced.

All the kids had to work hard to completely program a task in the time allotted.  The kids’ made it through this process of trial and error with creativity and persistance.

In the older grades, students may also use skills such as welding and metalworking to fashion the robots themselves.  They also graduate from Lego-based machines to actual metal, gears and circuitry.

Many Levels of Competition

The robotics competitions take place at every level:  regionally, statewide, nationally and internationally.  UNF in February will be the location of the local First Robotics Lego League Competition.

Because of McCombs’ success in growing the program here in Jacksonville, one of the national organizers is scheduled to attend this event. Members of the public are encouraged to come and watch.

As if this weren’t enough to keep him busy, McCombs just had a very big weekend.  On Saturday, October 24, he had the honor of being one of 13 speakers and four performers  at TEDX  Jacksonville 2015–Into the Machine.

Robotics clubs are valuable training grounds for the engineering and computer experts of tomorrow, McCombs said in his talk Saturday.

We need to train children in these skills because there is a deficit looming on the horizon. When Baby Boomers in these jobs retire, there will not be enough highly trained employees in the US take their place. Already, McCombs said, the work is going abroad and we are importing skilled people from other countries.

We can keep the jobs here, McCombs said, by showing tech and engineering companies, such as SpaceX, that our kids have the skills necessary to do the jobs.

Offering robotics courses in every school is a great way to do that, McCombs said. Teaching our children these skills will mean a strong economy and more tech and engineering jobs in Jacksonville.

McCombs’ talk will soon be up on the Tedx YouTube channel so check it out!    It is entitled “Why Every Kid Should Build a Robot.”

Have you built yours yet?

I am a homeschool mom of four, with two teen boys actively homeschooling, one with autism. I love mysteries, gardens, nineteenth century novels, cool weather whenever I can get it, and the company of old and new friends. My background is in English lit and law, with a smattering of German.

Have something to add? Please comment or correct me, below! Cancel reply

Who’s responsible for all this??

My name is Andrea LeDew. I live in Florida. In my youth, I studied German, English literature and the law.

Lately, I've been homeschooling my two youngest kids. One has autism.

I love gardens, good books, chocolate, and friends, old and new. And of course, putting pen to paper.

My older posts concern mostly homeschooling and disability issues, while the newer ones are mostly flash fiction and poetry. Feel free to look around.

Thanks so much for dropping in! More about me and this blog...

The circus is coming!

Part of a great team!