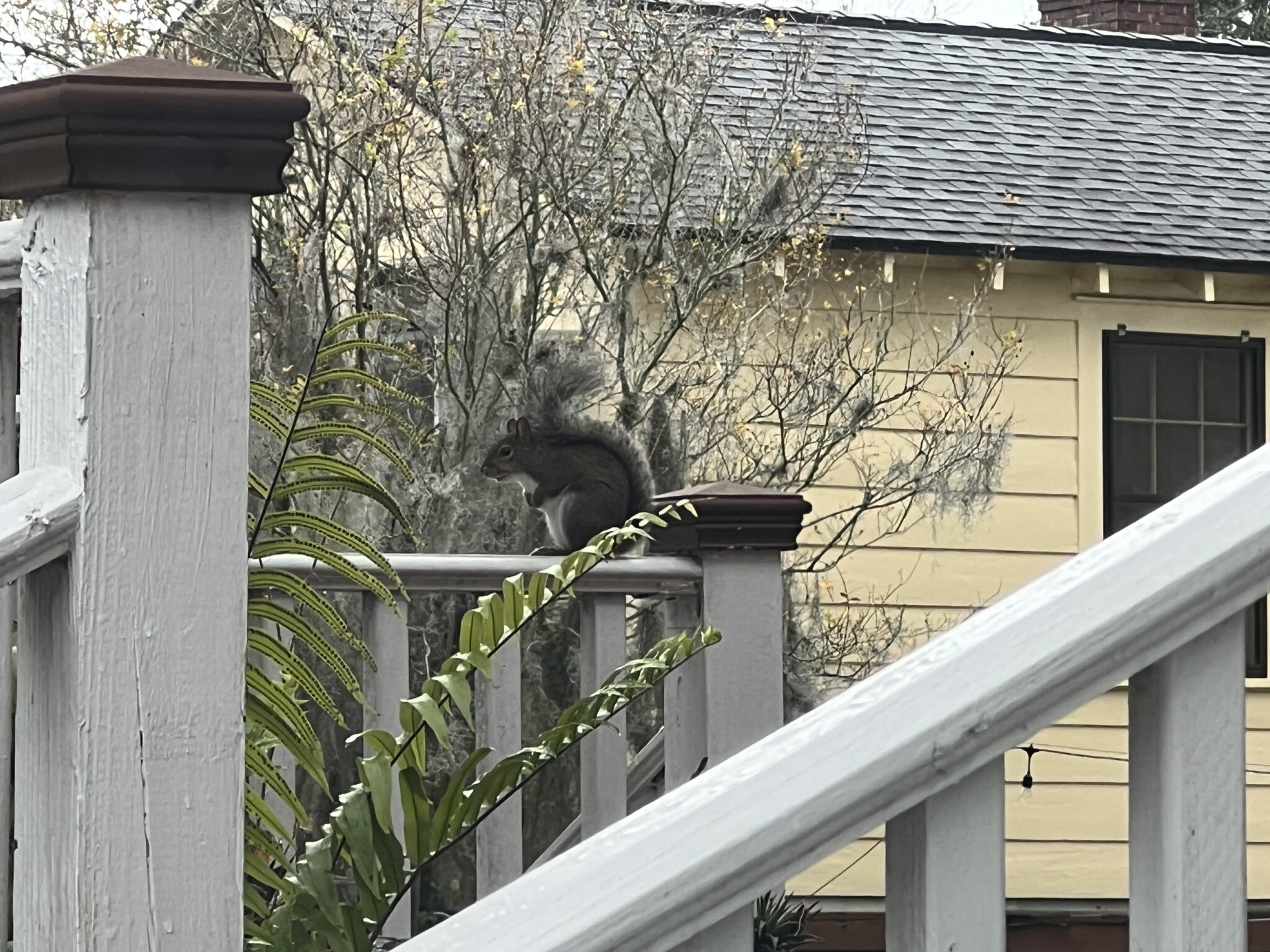 This poem describes a meeting between beasts to decide whether certain human beings should be allowed in their neighborhood.

I was inspired to write this narrative poem when I looked out toward our firepit, and saw that a great clump of Spanish Moss had dropped from our tree and taken up residence on a lawn chair. The way it was draped looked quite comfortable, a trail on each arm. From behind, the lawn chair appeared to be occupied by some mossy beast.

This solitary image turned into a formal meeting using something like Robert’s Rule of Order. Over the course of the many stanzas, the characters refer to the Great Fire of May 3, 1901 which consumed the bulk of the city of Jacksonville, FL. Any and all historical mistakes are, of course, my own.

Hope you enjoy this light hearted poem and keep warm and safe, during this weekend’s Christmas chill.

The Spanish Moss, it took a seat

Beside the raging fire.

It draped itself upon a lawnchair

As the flames grew higher.

The firepit attracted others.

A denizen of Under Porch Land,

Yet to meet his doom.

An urban squirrel perched on an arm

And gnawed a husk of nut.

The adirondacks held a pair

Of possums and a hawk.

“What think you of our neighbors?”

Said the owl, with quorum called.

He fiddled with his spectacles

And eyed the furry crowd.

“A point of order!” called the squirrel

And smoothed his rugged coat.

“You mean the couple, just moved in?

There’s neighbors all about.”

And beasts all nodded heads.

“And that’s not even mentioning

“We never will get anywhere

The owl, his beaky gavel banged

“I’m fine with them,” the hawk replied.

“They hardly know I’m there.

They squint and search. Unless I fly

Out in the open air…”

Said the racoon of his lair.

“They leave me food–a compost pile–

“This smoke can be a nuisance,”

Drawled the owl, for his part.

“It’s awful for my asthma,

And I’m waiting for a spark

“To singe the edge of this Old Tree–

A hundred years or more–

Which may have been a witness to

The Great Fire, back six score…”

Draping on its chair.

“My roots remember back so far,

Though they breathe naught, but air.

“I played a part–my ancestors,

At least–we fueled the blaze!

For people once made mattresses

Of me, in younger days.

“And at a mattress factory

One spring, when it was dry,

A careless human being

“And soon, the town was all consumed,

Each home, a smoldering pyre,

And people leapt into the river,

Drowning, in the fire.”

The circle round the fire was somber,

Shivering where they lay,

All thinking of the animals

That perished on that day.

“And our own house?” The squirrel clucked

And clutched his mangy tail.

“Did it burn, too?” His paw carressed

“Not yet!” So joked the Spanish Moss,

As though the thought were funny,

Though fire struck fear in every beast,

All creatures, bear to bunny.

“I probably shouldn’t sit here, then,”

Observed the moss with glee.

Would rather kindling be.

The animals looked to and fro

And realized, he was right,

And so, the Owl banged his beak,

Adjourned the meeting then.

The humans were allowed to stay.

The rest all bolted. When,

As if by fate, two humans

And marched down to the firepit,

And as they nestled in,

To hash the happenings of the day,

The woman brushed the moss aside–

Too far, for any spark to fly–

And spared us all the type of fire

That wipes the world away.

For more on the perils of being human, read Human. For another nostalgic look at a victim of fire, read Fire Escape.

Evening Wash
Next Post:Bones of Christmas