You are here: Home / Let Bygones be Bygones:Archives / Blogposts of Yesteryear / Alarming
February 12, 2018 by Andrea LeDew 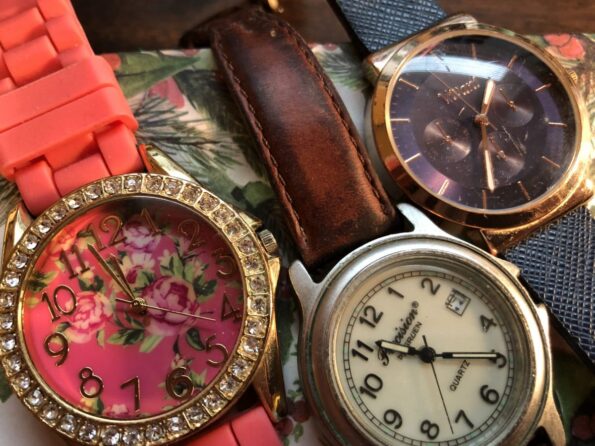 When you’ve had your smartphone for a while, you accumulate a lot of clutter.  You know the kind I mean: old texts, emails from people you hardly remember, screenshots, reminders and notes to yourself, bookmarks, saved articles and e-books.  Our phones have taken the place of photo albums, journals, messages scrawled on the back of an envelope.  And, in large part, they have replaced memory itself.  Why do I need to remember something, if I have it on my phone?

Long ago, when I was in elementary or early junior high, having a good memory still held some prestige, some relevance.  I learned Lewis Carroll’s poems “Jabberwocky” and “The Walrus and the Carpenter” by heart, as we used to say.  I learned the notes for sight reading on the piano, with the mnemonic devices F-A-C-E and Every Good Boy Deserves Fudge.  And of course, I had to memorize the telephone numbers of my friends.

Now, we rarely have to use our memories, except when we need to enter a password or code.  But Heaven forbid, then, if we forget!

We had a lovely time dealing with the perils of a faulty memory the other day, when purchasing cellphones.  The salesperson was very helpful, walking us through the many steps to get each device up and running.  But unfortunately, she assumed that the person before her had a degree of memory that in fact, he did not.  She allowed him to enter his passcode before allowing me to see it and write it down.

Memory is often an issue with autism.  My son has been able to recall events from the distant past with clarity, and yet draw a blank on something he has just learned or has just done within the past few minutes.  Math can be a real struggle, since so much of early math depends upon memorization of math facts.  The calculator can usually compensate for weaknesses in this area, but not always.  Visual schedules were a staple in his early days in school, a way of organizing and guiding a mind that did not always tread the well-worn path that others could walk blindfolded.

We continue to have issues with oft-repeated commands:  Put away the cheese.  In a plastic bag.  Sealed.  In the cheese drawer.  In the fridge.

Any one of the components of this multistep command could be missing from his memory.  I have found the block of cheese, shamelessly naked, but carefully placed in the cheese drawer in the fridge.  I have found the cheese in a plastic bag, but unsealed and on the countertop, approaching lukewarm.  This is a minor annoyance, but one fueled by an issue with memory.   No amount of reminding seems to guarantee full compliance with the rule.

Well, it is easy to see how a passcode entered one day could have disappeared from memory by the next.  And it did.

After three hours with a rep on a customer service line (again very helpful and nice, but the experience was no less infuriating for all that), I was in possession of a wiped and restored phone, ready to be added to our family Cloud account.  Only, unfortunately, it would be three days before another customer service rep could call and set that up for me.

So, after getting to enjoy the fresh independence of having his own phone for all of 24 hours, my son has to go without it for the next three days!

What was the first thing I did?  I put a reminder on my phone.

Remembering What to do Next

Our smartphones are not just repositories of memory, treasure chests of the past.  They are also heralds of the future.  With dictatorial tendencies.

Two apps in particular seem to lend themselves to charting the future, in our family, at least.

First is the reminder, or “to-do” listing app.  A number of bullets, which you fill out, to chart a certain sequence of events or a number of objects.  Great for grocery lists.  Not so great for life planning.

Each list I created with the best of intentions.  But each brought me only disappointment and guilt.

On any of the lists, have the tasks, so lovingly compiled, actually been completed?  Other than the grocery list, I would have to say probably not.

When you have that many lists, you actually need a list to keep track of your lists.  My problem was, my aspirations were limitless, and optimistic, but my time was limited and inevitably curtailed by event after unforeseeable event.

Homeschooling lends itself to lists.  Layers upon layers of lists.  First, there are the students.  How many you have determines the number of lists you make. Then, there are the subjects.  Unlike in public school, in homeschooling one can really go wild here.  You could have ten or twelve, rather than the usual six.  You could teach philosophy to kindergarteners, if you wanted to.  Then there are the goals, or tasks, that need to be accomplished within each subject. Learn the times tables, for example.  Read at a second-grade level.

This is where the list becomes dictatorial.  Rather than allowing a homeschool (for example) to go forward organically, pressing the boundaries of today’s abilities to blossom into tomorrow’s, this tendency to revert to lists makes the process less pliable, more mechanical.  Less fun.  Despite my aversion to Common Core and other state standards, I found that, over the years, I had created my own set of “standards” almost as rigid as any the state or federal government could supply.

Naturally, I have decided to leave those on my old phone.  And how remarkably freeing that decision has been.  To start from scratch without an obligation to my name!

Now that I know the perils of list making, I will think twice before clicking on the app.  I remember a scene from one of Amy Tan’s books, The Joy Luck Club, I think, where the main character is numbering off on the fingers of one hand, the tasks she has to do for the day.  Imagine, only having to do five things!

It is ingrained in our beings now, that there is a single concept of time, that it “is” a certain time at any given moment.  I remember reading or hearing somewhere that this was not always the case:  once, not so long ago, time was somewhat variable across distance.  People had local time.  Not just in the sense of multiple time zones, but in the sense of being asynchronous, minutes or more apart from one town to the next.  Now, with everyone internationally synchronized to the nanosecond, it is hard to imagine living with such anachronistic disparities.  And horrifying, to imagine the chaos that might ensue.

Our use of smartphones only intensifies the power of time as dictator.  I remember my early days as a lawyer, when beepers were just coming into use.   I was appalled at the notion of actually carrying something on my person that would allow access at any time, even if only to give me a callback number.  Wasn’t it enough that I was in the office for hours each day and could receive messages there?  This seemed to me such a gross invasion of privacy.  But others considered it a godsend, a great time management tool.

Needless to say, I was late to convert to cellphones, and later still to make the further conversion to smartphones.  It still creeps me out to think of all the ways my online behavior, my purchasing, my social media presence, my blogging, even my physical to and froing, may all be remotely and continuously analyzed and parsed to someone’s profit.

No Cause for Alarm

One way to bow to the power of this ever present, synchronized ruler of our lives is to use the alarm feature found on every phone.  Rather than glancing at the clock (or watch, if you still have one!) every five minutes, as an event or deadline approaches, we go into our alarm app.  We set it and forget it.  The sudden noise is annoying, but better than constantly worrying that the deadline will be missed.

I do use alarms, and I became cognizant of exactly how much I use them, when I went to transfer my alarms from one phone to the other.

My son’s failures in memory did not come out of the ether.  I also have failings in that department.  And whereas I used to write notes to myself incessantly, or glance at my watch, or check my calendar habitually, now many of these memory tools are contained within my phone.  When I switched over to my new phone, I discovered that, over the course of a few years, I had set up an alarm to go off nearly every quarter hour of my waking day.  They weren’t all “on” at once, but they were ready if I needed them.  And, apparently, I had needed them at some point, or I wouldn’t have set them up.

An interesting aspect of setting alarms on a smart phone is that they allow you to name them.  And thus, in the course of deciding which alarms to keep and which to toss, I got to relive a number of memories I had all but forgotten.

Years ago, I had one kid in college and the other in high school while two more homeschooled.  None of them had a car of their own, so I was constantly dropping off and picking up.  My alarm names reflected this incarnation of myself as an Ueber driver, with quick abbreviations, like PU for pick up and DO for drop off.  Finally, we were able to have a third car for their use, but each time there was an accident or a car was in the shop, the same type of alarms would show up.  Much of that has quieted down now, but it will ramp up again as the younger kids’ social lives do, I’m sure.  When these alarms disappear altogether, I’ll know my kids have grown up.

Another set of alarms were medical in nature, mostly associated with my surgery earlier in the year.  I had early morning alarms for physical therapy, multiple alerts each day (and night) to remind me to take my medications, and always, the better angel on my shoulder, reminding me (by way of alarm) to get out and exercise.

Some of the alarms were more eerie.  I’m sure many of you have alarms like the ones I described above.  But perhaps fewer have lived through a hurricane season such as we recently had.  My alarms from this period were ominous:  High Tide.  End Flash Flood Warning.

I don’t think I ever was so happy to hear that beeping noise!

All I did to change my alarms was to delete the names I gave to them.  Setting became much easier, if I didn’t have to sift between which title was more relevant, which easier to edit.  In fact I had multiple alarms for the exact same time of day!

For those of you who enjoy the process of organizing, checking lists and responding to alarms, more power to you.  But for the rest of us, who just feel pushed, jostled, irritated and downright bullied by them, maybe we should all take some time, going through our treasure trove of lists and alarms.