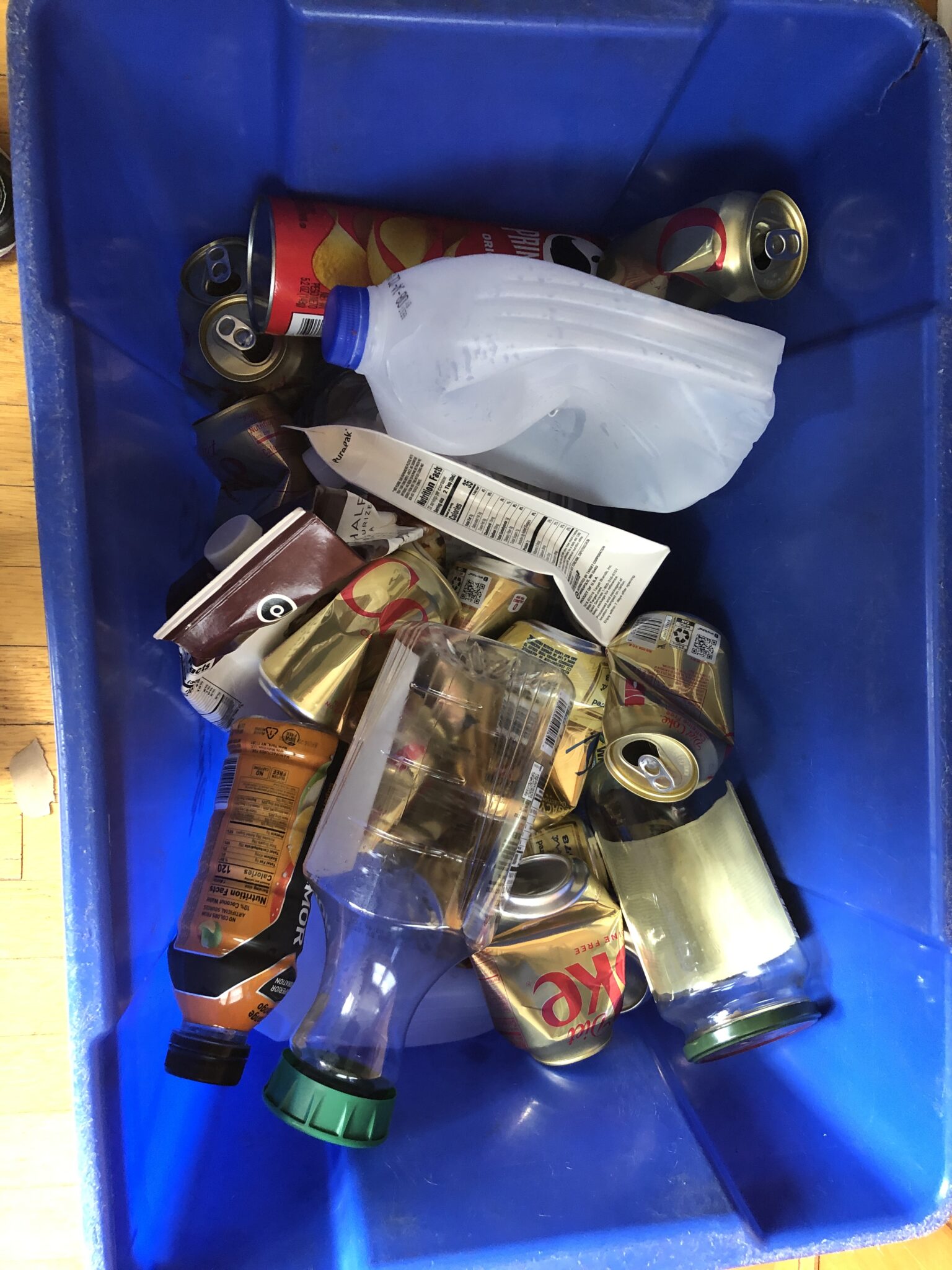 This poem is voiced by a proud recycler of my generation, who does his or her duty and yet vaguely realizes, that while collecting recyclables may be enough to assuage his or her guilt, it is not nearly enough, to make a dent in the underlying problem.

This is not a garden poem, except in the sense that it is a tongue in cheek environmental poem.

I remember early in my marriage, we were very interested in environmental issues, such as oil drilling in the Gulf, and in South Florida, we already had the added tax burden of buying special blue garbage bags for trash, and the task of separating out recyclables. At that time, we would go to visit my parents, even before we had kids in tow, and marvel at the waste, at how dinner was chucked into the garbage rather than saved for another meal. We used to call their place “The House of Wasted Food.”

Well, we may, as a large family, have been better about saving and eating leftovers. But my shopping habits have not improved much on my mother’s. I still bring home such an enormous amount of plastic and paper waste, as to make millennials cry in their sleep. And in some ways, my parents were much better about reusing things. This, I suspect was a faint echo of their own parents’ Depression mentality.

Some in my generation have learned to find comfort in small gestures. By religiously recycling, rather than throwing things away in the garbage, we shield ourselves from the guilty implications of all this waste. It’s a hassle, but it makes us feel environmentally friendly, when we don’t chuck the containers, as well as their contents.

Yet, we probably consume more than our parents and as a net result there is even more waste in the landfill. The “solution” of sending such things as recyclable plastics off to foreign lands is also meeting resistance, as the Chinese and others become pickier about what they will accept, and supply chains grind to a halt.

Not that I have a solution, other than to shop where the least number of containers are used to hold your goods. Still working on this, myself, as you can see from the photo above, which is only a fraction of our biweekly output.

My poem is voiced by a proud recycler of my generation, who does his or her duty and yet vaguely realizes, that while collecting recyclables may be enough to assuage their guilt, it is not nearly enough, to make a dent in the underlying problem.

Hope you don’t mind my little pun in the title. A container garden is a garden in which all the plants are potted, rather than grown in the ground. Here, the narrator tends to her recycle bin just as a devoted gardener tends to her plot.

For other references in the poem: in South Florida, “Mount Trashmore,” a play on words invoking the American landmark Mount Rushmore, was our affectionate title for the local dump. I expect we were not alone in using this moniker. Many of my vintage will also remember the bottle and jug cutter of late night fame. The phrase “rinse, repeat” is also familiar from shampoo commercials of the seventies. Thanks for coming by to read!

Ode to the Recycle Bin–

The one I put containers in–

I rinse, repeat, without a care

And though such waste seems such a sin,

I cherish my recycle bin.

I pile it high and pile it wide.

There’s nothing we can use inside–

No bottles, emptied of their wine,

Turn into glasses green, to dine

With, as my mother used to do.

As late night ads instructed you.

No more, do penny hoards reside

In pickle jars, with their insides

It all goes off to Garbage Hill.

No more are used to mix paint up

Nor dropped off at the grammar school,

With scores of box tops, as a rule.

Who, quick, discard a cardboard box

No more made whole, by careful darn–

As if we sewed, or knitted yarn!

For things are meant to be thrown away.

But I keep asking, anyway,

What size Mount Trashmore is, today.

For an environmental poem about climate change read Green Land

For a not so flattering look at one homeowner’s suburban mentality during Black Lives Matter Protests, read Provincial