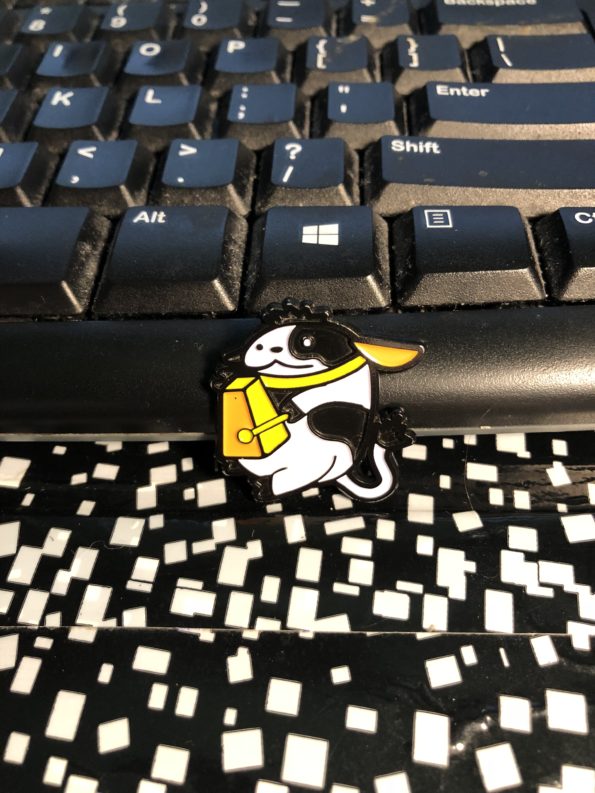 I first heard this news on Meetup and Slack.  My local WordPress group is having a party.  By that I mean, of course, an open lab, at which there will be cake.

Fifteen is 1500 in Computing Years

I have a fifteen-year-old, so I appreciate how long it’s been.  A lot has happened in that time.

In 2002, I had not only a newborn, but also a two-year-old with developmental delays.  This meant that Early Intervention therapists came to my house twice a week.  I had a ten-year-old and a five-year-old in elementary school, too.  Middle school was on the horizon.  We had one desktop computer, an IMac.  I’m not even sure we had those cheesy voice-only cell phones yet.  And we still had a cat.

Until recently, I had been maintaining this blog only on and off.  Initially it started out as a place to store assignments written by kids in our homeschool co-op.  I helped to teach a Journalism class.  Don’t worry.  I was with someone who actually knew something about journalism.

We needed a platform on which to present the students’ writing, and a blog seemed perfect.  That is, until I got stuck with the job of setting it up.

That was the Fall of 2015.  By the end of the school year, it was clear, that the journalism students had no actual interest in writing.  At least not in that format.  The experienced reporter/teacher moved away with her military husband and kids, and I was left, so to speak, holding the blog.

The space lay fallow for a while, with only a post or two.  When it came time to renew the hosting, etc., I had to think hard.  Was it worth it, to keep it?  What was I going to do with this blog?  When was I going to find time to write? Was it wise to continue?

You have to remember that I went to law school.  I worked as a lawyer for about five years, before having this litter of children.  I still keep my license.  So, it is very important to me, that I do nothing to jeopardize that license.

Running a blog, I had been told, years before, by a law school professor, no less, was tantamount to taking your life into your own hands.

To quote, “Why would you want to do that?”

I have spoken to other lawyers, since, who run perfectly good blogs.  They have reminded me of a little-known fact:  At least in this country, and for the time being, even lawyers have the right to free speech.

About that time, I hooked up to WordPress Reader and began reading posts.  Warning:  This can be addictive.

Reader is a wonderful community, huge, beyond my ability to grasp its size.  There are WordPress blogs on every topic known to man.  Some are old, some new.  The writers behind them are likewise varied: old and young, professional and not so much, funny and serious, preachy and irreverent.  Some are bent on making money through ads or products or books.  Others are purely social or stream-of-consciousness.

I was new to this bloggers’ world, even at my age, even after the act of blogging had already begun to seem passé.  I was still of the opinion that “sharing” (online, that is) was overrated.  And potentially dangerous.

But once smartphones came along, I think the entire world got on board.  We all realized that this digital platform, like it or not, is the new town square.

I gradually loosened up a few settings.  I “went public.”  It was frightening.

Then, last Fall, I began going to the local WordPress group.

I found the group on the Meetup app, which I had installed for the purpose of keeping up with my son’s robotics activities.  I was surprised to find that there were so many like-minded people in my area, who were either writing, designing, troubleshooting or overseeing WordPress sites.  Some did all of the above.  And many had blogs like mine.

I had run into a few problems, a few issues over the years, that I could’ve used some help with.  And I thought, what a wonderful resource.  Real, live people.  Of course, it occurred to me, that they could all be axe-murderers.  But it was worth a try.

We have an evening meetup and a daytime meetup, each once a month.  I don’t go to every one, but I go when I can.  Because I always return home with some morsel of information I would never have found otherwise.

Our monthly meeting is in the evening, and between 15 and 30 people have been known to attend.  The room holds web designers, programmers, security experts, troubleshooters, SEO specialists and a number of people who either write or supervise content.  Many people are multi-taskers and flow easily from one area of expertise to another.  If you have a question about WordPress, there is probably someone in that room who can answer it.  Or, if not, at least point you in the right direction.

We get beginning bloggers, but we also get the heads of design or SEO firms.  The range of ability, experience and focus is mind-boggling. What they all have in common is an enthusiasm for WordPress and a belief in its potential.  They say about 30% of The Internet is run on WordPress now.  That’s nearly 60% of the sites that use content management systems such as WordPress (same source).  WordPress must be doing something right.

I am primarily a passive participant, but many of the members have given presentations during these sessions.  How to write blog content that gets noticed by Google.  Accessibility concerns on your website.  SEO Tricks.  These are just some of the talks I have heard, not that I can claim to have fully absorbed, much less implemented, their content.

And, to top it all off,  there’s usually pizza.

We also meet once a month for lunch, an informal affair.  People exchange cards if they have them, talk about problems they’ve run into, compare their aspirations for their website.  It is amazing, how many different purposes a site can be created for.

At our last lunch meetup, there was a novelist, a massage therapist, a garden enthusiast, a web designer, a computer programmer, and a brand new would-be blogger/creative writer.  And me.

It’s a great place to trade information, although I tend to be mostly on the receiving end, myself.  People are generous with their time and attention, and if the problem is complex, they can give you their card or that of someone they know, who can do the job, for a fee.  Sure beats trying to dredge up the answer on You Tube.

For example, last time, I learned what to do with old posts.  And you’re always learning what other people are doing on their sites:  what plugins and widgets and themes they are using, how they installed their SSL, what hosting service they use. Things like that.

And, occasionally, you make a friend!

For sure, the triumph of any local WordPress meetup group is hosting a WordCamp in their town.  WordCamp, as you probably know, is an annual conference, designed to cover all aspects of WordPress sites.  Different locales host different Word Camps.  There’s WordCamp Orlando, WordCamp Atlanta, WordCamp Paris, WordCamp HongKong.  You could probably go to a Wordcamp somewhere in the world (possibly, somewhere in the US) every weekend.  Here’s the schedule.

Ours took place on a weekend this spring, and there were five or six sessions a day, for two days. Several hundred people showed up. Some Word Camps are larger.  WordCamp US in Nashville in December 2017 had approximately 2500 attend between in-person and livestreaming.

I decided to go to the local WordCamp this year, though it meant saddling my husband with the kids for two days.  I am so glad I did. The fee was very reasonable, so much so, in fact, that I decided to give a little extra, to help fund the venture.  This got my icon in the brochure, and on the site, which is never bad press.

The topics covered ranged from Beginner level to more Advanced.  There were writing tips, tips on SEO, Google Analytics, various plugins, security etc.  There were several vendors on site, offering hosting, troubleshooting, SEO help, design services, the next generation in login technology, etc.  I even sat near someone who specialized only in popups.

And there were lots of bloggers.  I met several people whose mission somehow touched disability.  I also met lots of mom bloggers.  Everyone was friendly, and there was swag.

My favorite swag was the little mascot.  He’s called Wapuu, and each WordCamp designs their own version of him.  The one they used at our WordCamp is a pin, which is essentially a black and white cow with a cowbell.   They call it Cowpuu, or Wamuu, since Jacksonville once had the name Cowford.   It is so cute!  I keep it on my little sweatshirt that I don first thing in the morning when the AC feels too cool.  It reminds me that I belong to a community.  And that feels good.

There is even an accessibility Wapuu.  And a Gutenberg one, made to look like the bearded inventor of the printing press.  For a taste of what some of the designs look like, see this page.

It’s been an amazing fifteen years for WordPress .  For me, interacting with WordPress in different ways, it has been an interesting three years.  Happy Birthday WordPress!   And may we all enjoy many more!