You are here: Home / Let Bygones be Bygones:Archives / Blogposts of Yesteryear / Of Peanut Butter and Privacy
May 25, 2018 by Andrea LeDew 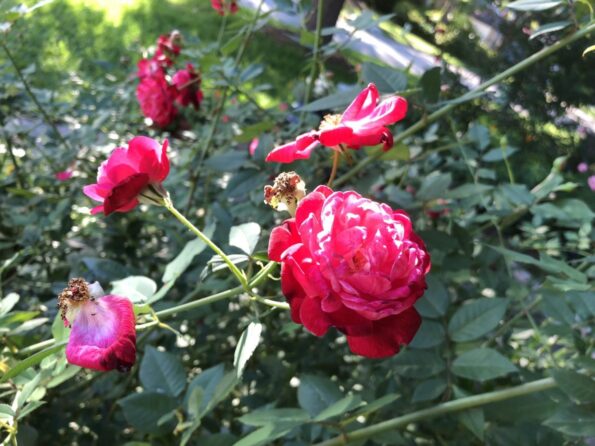 Living in my house means growing accustomed to things being out of place.

Peanut butter smeared on the roll of paper towels.  A random sock in the center of the floor.  A bottle of ketchup, with its lid hinged open, abandoned on the counter.  Dishes, strewn like offerings, before the altar of the desktop monitor.

These things no longer surprise me.  They make me crazy, to be sure. But I do my best to be zen about it.  It is what it is.

In an article in the HSLDA blog, Homeschooling Now, there is a quote from Marcia Ramsland’s book, Simplify Your Life: “The faster the pace of your life, the more organized you need to be.”

This may seem like a truism to some, but it hit me on the head with its bluntness. What may have worked, at least passably, when you were young and single may not cut it when you run a household of six.

I have never been much good at organization.  It is really no surprise to anyone that my children, in some small way, might take after me.  As they say, the apple never falls far from the tree.

I remember lying on my bed, reading, in my perfectly ordered teen bedroom.  My mother, whose preferences ordained that it must be so, entered unannounced.

“Why,” she asked, pulling out a dresser drawer and exposing its brimming papery contents to the surrounding atmosphere, “do you have this?”

I could manage very little, by way of logical explanation, beyond a shrug.  Perhaps the real answer was, because in all my life I had only had this one little drawer that was mine, that I could organize as I pleased.  Or not.

That drawer was full of papers, my papers.  It happened to be a collection of letters from a very special friend.  I had kept them, because they needed to be kept.

You need not remind me, that this is the mantra of a hoarder.

Going to my parent’s house has always seemed a bit like a vacation in my adult life.  Not because of their desire to take my children off my hands. My not-always-good kids were tolerated and celebrated.  They were bathed with admiration and treated to actual meals, sitting at a table, without a TV or other screen in sight.  With nothing but conversation to entertain them.

But the real miracle of my parent’s house was the wide-open spaces.  The cleared, or carefully-, but sparingly-decorated surfaces.  The aura of cleanliness and order.  It was calming.

It did not scream at you of unfinished business.

Orchestrating a meal for six at the table has proven to be too much for me, except on special occasions.  A pristine house has been equally elusive.  I have learned to settle for less than the ideal.  For I would have gone nuts in the attempt to reach it.

When it is a choice between anything and sanity, I always pick sanity.

So, at meals, we each serve ourselves from the stove top.  Everyone goes to their favorite corner.  On the rare occasions that my husband has returned from work in time for dinner, he and I enjoy our repast by the modern hearth.  We watch comedians or Netflix or the news, as we please.  And pausing to mute the device, every so often, we engage in real conversation.

It is not pretty.  It is not idyllic.  I doubt the American Academy of Pediatricians would approve.  But it works for us.

Perhaps it is just my failure to instill good habits in my children early which has come back to bite me.

Perhaps it is laziness.  Perhaps it is a schizophrenic kind of modern feminism, that casts off the shackles of traditional housewifery, the cleaning, the scrubbing, the keeping up with the Joneses, while still cherishing the many freedoms and advantages and pleasures of being a stay at home mom.

Or perhaps it is my association of punctilious housekeeping with an invasion of my privacy, that makes me resist a thorough overhaul of my house before all the chicks have flown the coop.

Privacy is a funny thing.  It is so personal to each of us, and so variable between us.  My privacy, the type of things I choose to keep private, may not be the same as yours.

Often the difference is generational.  My parents didn’t even want to have to deal with having a smartphone or a social media account.  My own generation seems to be mixed, between those that embrace the technology, often to the horror and embarrassment of their children, and those who shun it, as a waste of time.  Meanwhile our children, and their children even more so, naturally swim in its amniotic fluid, never suspecting what poisons might lurk there.

The recent news items having to do with social media and privacy have led many of us to consider the price of online openness.  Or, conversely, how much are we willing to pay for our privacy?

Being online today is like having an automobile in the age before roads.  One must put up with a certain degree of peril and inconvenience, to exert the freedoms associated with this new technology.  But eventually, one would hope, roads will be built, and not only roads, but street signs and stoplights and methods of laying blame and holding people accountable.

We take all these traffic amenities for granted.  But when we lived in South Florida early in our marriage, Hurricane Andrew blew through.  Right afterwards, my husband was on a team to help clean up some neighborhoods in the Homestead area that had been hardest hit.  He came back with horror stories of a flattened wasteland.  No street signs.  No traffic lights.  No landmarks.  No Google Earth either.

Everything was gone or disfigured.  It was impossible to orient yourself, to know which way was which, in this landscape.  It was distressing and frightening.

Even I could not tolerate that level of disorder for long.

Of course, we do not perceive privacy as a good thing, when we are the ones being shut out.  Such is the plight of the mother of a teenager.  Everyday, I endure dirty looks from teens who apparently consider my quick glance at their open screen to be an invasion.

But I have to confess, I feel the same when I am at the computer, writing.  A work in process, like a half-dressed person, is not suitable viewing for anyone.  And those who want to view, who insist upon viewing…Isn’t that the definition of leering?  Isn’t that being a Peeping Tom of the worst order?

The unfiltered openness of young children, on the other hand, or even those with less developed social skills can be astonishing. I once entered an autism classroom and was immediately greeted with the insightful observation: “You’re fat!”  Sadly, some things cannot be hidden.

When Early Intervention came to my house for therapies all those years ago, I was first introduced to the concept of Theory of Mind.  At the time this was considered a deficit in those with autism and so therapists were carefully watching for any indication that perhaps my son did not grasp, at the appropriate age, that other minds were thinking other things.

It seems to me, that without this awareness of other minds, and the ability to exclude them from our own thoughts, the concept of privacy cannot germinate.  It Is only by realizing that we can keep a secret by not speaking (or writing) what we think or have done, that we assign a value to those things remaining untold.

If the right to not speak something, or to carefully choose to whom to divulge our secrets, has value to us, then having that choice taken away seems invasive.

In the past, these thoughts, which we might want to keep private, were spoken to a limited audience or, at most, written on paper, which could be burnt or otherwise disposed of.  We could be reasonably confident that our confidences would be kept.

Now, in this vast brain that we all share, our thoughts are being transmitted across space we do not control, by people we do not know, and used by forces we do not comprehend.  That leaves us feeling very vulnerable, indeed.

So perhaps we ought to do like our teens, and shoot the Internet a dirty look.  And let it know: This is private!

Previous Post: « To the Poet (Poem)
Next Post: Honor Roll for Those Who Can’t Make Honor Roll »