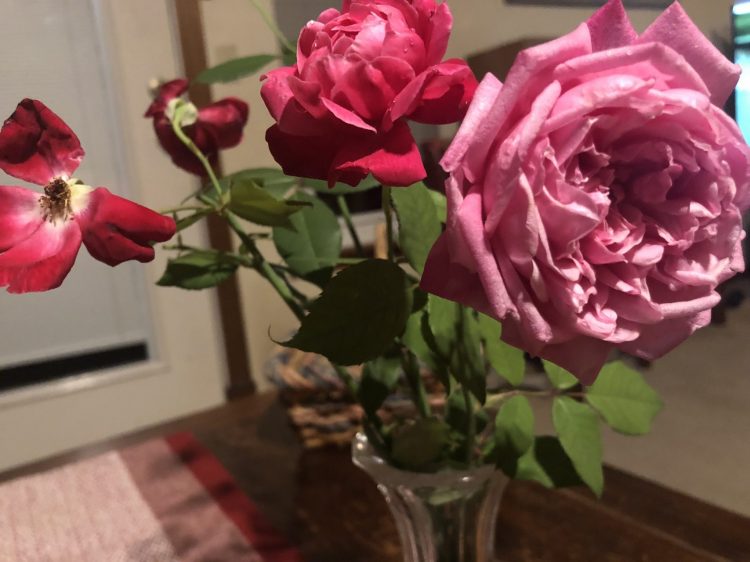 You are here: Home / Let Bygones be Bygones:Archives / Poetry of Yesteryear / Of Roses
January 5, 2019 by Andrea LeDew

{This is a response to a prompt from What Pegman Saw.  Today we are visiting the island of St Helena, to which Napoleon was sent in exile, after his defeat at Waterloo.

Having just watched the new edition of Vanity Fair on Amazon Prime, I was very much in the mood for a Napoleonic saga (War and Peace ain’t half bad, either.)   We’ll have to settle for a rather silly poem.

Napoleon calls to my mind, the Empress Josèphine of France, Napoleon’s wife.  She was called Rose, or Marie, before he gave her the name Josèphine, and was from the Caribbean.  She was Creole, the term used for “mixed race” in those days, I believe.

Napoleon was  Josèphine’s second husband.  Her first husband was executed during the Reign of Terror, and her connection with him resulted, in her spending some time in jail.  When Robbespierre, himself, was executed, Josèphine was released and her possessions returned to her.

She married Napoleon sometime after her husband’s death.  She was six years older than Napoleon and had already had two children, by her first husband.

Josèphine never bore any children to Napoleon, and he divorced her, for that reason, in a rather romantic ceremony, in which they exchanged love letters, in 1809.  He then married  a more fecund princess from his frequent opponent in war, Austria.  They had a son.

Josèphine is famous for loving roses.  She hired several English and Scottish gardeners, botanists and horticulturalists to help her collect and care for them.  Dupont was one of these, and he developed 25 new types of roses.  A process used for breeding new hybrid roses is credited to his work at Malmaison.

Malmaison, outside Paris, was Josèphine and Napoleon’s home for many years, and her residence after their divorce.  Neither party was especially faithful.  Divorce was made legal under the Napoleonic Code, one of Napoleon’s positive contributions to history.

By 1900, there were at least 8000 types of roses, as compared to  Malmaison’s original group of 200.  Several roses from this original group were collected by Napoleon, for his beloved Josèphine, in far-flung regions of the globe.

Napoleon III erected a statue of his grandmother, in 1859, in LaSavane Park in Fort-de-France, Martinique. Martinique is the Caribbean island, where Josèphine lived as a girl.

In the early 1990’s, this statue’s head was broken off, and never found again.  The statue was also splashed with blood.

These acts were apparently in protest, against Josephine’s role, in convincing Napoleon to reinstate slavery in all the French colonies. Years before, in the aftermath of the the French Revolution, France had already abolished slavery in the colonies, though Martinique never complied with this edict.

I thought it ironic, that both Josèphine and her first husband were beheaded, at some point.  Also, that a person of mixed-race ancestry would promote the enslavement of races, which she might, to some degree, call her own.

Of course Josephine is not alone, in having done this, and, likely, her family in Martinique had financial interests, in continuing the practice of slave labor on the islands

Napoleon, dying in exile on St. Helena (1815-1821), a then-British island, off the West Coast of Africa, is said to have expressed his strong feelings for Josephine. I have taken the liberty of  paraphrasing his statement.

Here is my sing-songy poem.  For some reason, the meter fits the hymn “Oh God, our help in ages past,” and I could not help but find myself singing it.  I am indebted to Wikipedia and the Encyclopedia Britannica, for the many facts cobbled together here.  Please let me know which ones I got wrong.}

A Creole, shipped from windswept isles,

A child bride at sixteen,

Born Rose, you rose in rank, to be

You spent some time in jail,

He honeymooned in Egypt, far.

And cultivated love and roses,

New roses while with you.

From hundreds: only two.

He won, and lost, both hearts and wars.

Divorced, for lack of spawn.

Your statue, in La Savane Park,

Installed by your grandson,

Had overlooked the greenery

With Third’s most glowing praise:

Beheaded and defaced in blood,

For all your winning ways.

And you, stiff in the grave.

Was all the General said.

For the tale of another ill-fated statue, read Statues.