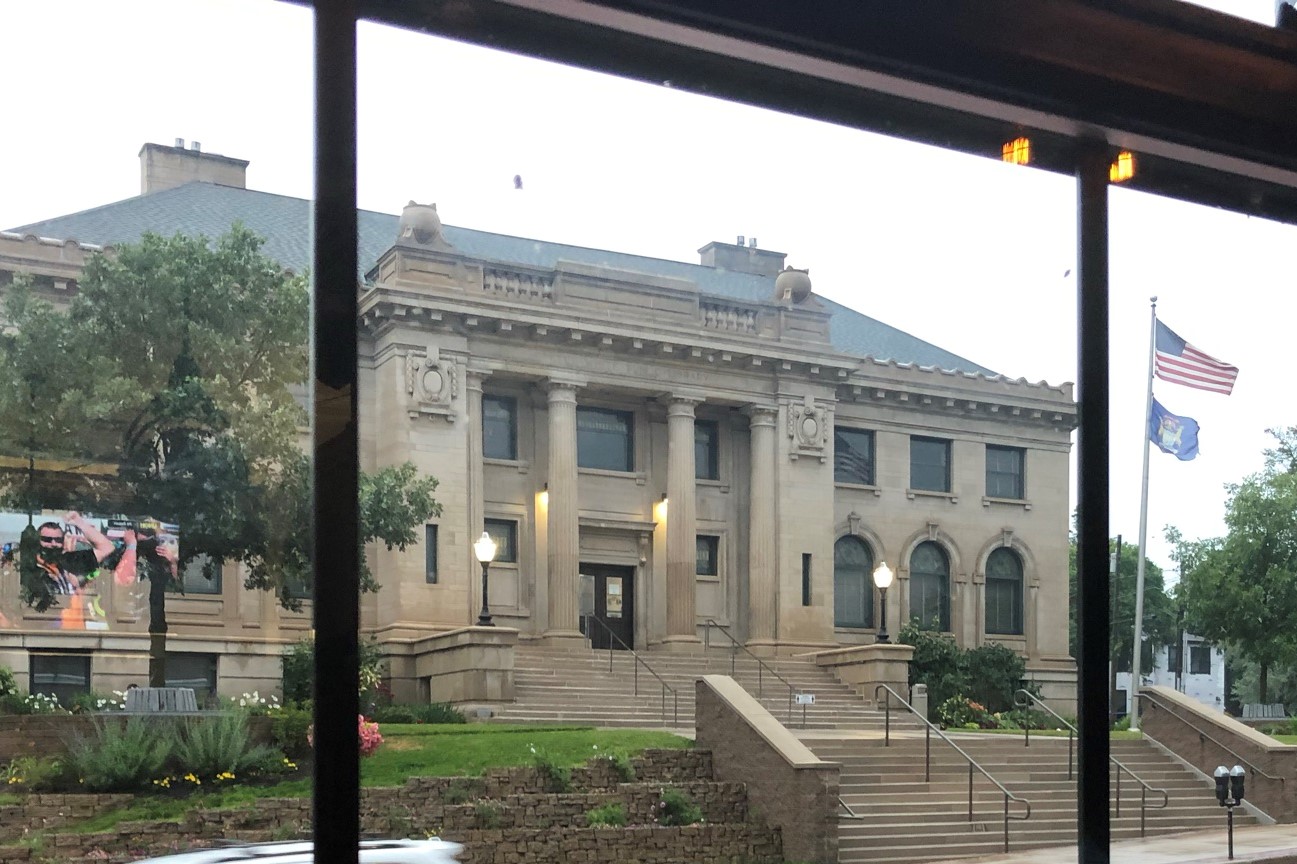 This is episode five in the story Resilience, about a mother and the two boys she is homeschooling. To read the previous episodes, please see Resilience I, Resilience II, Resilience III and Resilience IV. They will make more sense if you read them in order, since they are written as installments, which will eventually make up a whole.

To save yourself the time of hunting them down, you can always sign up for my newsletter, and get the new episodes each week in your inbox. Thanks for coming by to read!

The library stood on the High Street, up the hill from the theater.  Or at least, what flatlander Floridians might call a hill.  It was white and clad in gray-veined marble, with stately columns and a long two-tiered staircase, bisected by a flat landing and flanked on either side by rosebushes.  The great magnate, Andrew Carnegie, had built the library early in the last century, and it had all the trappings of a grand manor house.  Only, those who had the good fortune to live there were all books.

Aiden had been indifferent to books, once, years back, when they lived a “normal” life.  Then, there were so many toys to play with, in their small apartment uptown.  They even had a TV.  Dad was there, then, and Grandpa too, from time to time, when he was in town, and Mom worked at the local elementary school as an art teacher.

There had been no question, at that time, that Aiden and Alvin would go to the very same school, once they were old enough.  But as preschoolers, that moment seemed so far away.  They had Dad to play with at home, Dad’s hipster beard to stroke and yank when they were naughty, Dad’s shoulder to cry on, or lay limp over, in feigned sleep.  He watched them, took them places, fed them.  In his bathrobe in the mornings, he’d read the paper or do bills, or check his phone for odd jobs he might do on the weekend, like fix someone’s leaky faucet, or start someone’s car.  But on weekdays, twenty-four-seven, he belonged to Aiden and Alvin, alone.

Aiden sometimes wondered, if that’s what drove him away.  Having to be home, minding kids all the time.  Or maybe it was Grandpa’s illness, which forced the old man to move into their already cramped apartment, and Mom to go part-time, so that more of the money burden fell on Dad.  Dad didn’t like that, being the breadwinner.  He was more of a free spirit.  Mom was the practical one, the organizer in the family.

Aiden didn’t like Dad being gone at first, either.  But eventually, he was gone so much of the time that it became normal.  It was all so long ago.  And whenever he asked Mom to fill in the gaps in his memory, she grinned wistfully, and brought up something much more fascinating.  And Aiden found himself hopelessly distracted.  All Aiden could remember of Dad was his salt-and-pepper hair and the oddly reddish lumberjack beard, and the salty smell of Dad’s strong, broad shoulders under Aiden’s chin.

Once Dad had gone, and Grampa died, once they had made the sudden, flurried move to the river camp, just the three of them, all mention of the boys going to school ceased.  Mom seemed to have rejected society out of hand.

Especially after they fired Mom.  The school had apparently decided it had no need, after all, for an art teacher.  There was only time to focus on the three R’s, reading, writing and ‘rithmetic, to prepare for high stakes tests, and the shiny fashionable STEM subjects–science, technology, engineering, and math. As if children, as a population, consisted entirely of budding engineers.

There was no need for Art at all, really, in the school’s estimation—at least that was what Mom said.  Art had basically ceased to exist, as a subject worthy of contemplation, much less practice or dutiful study, in the shadow of such esteemed and noble left-brained pursuits.

Mom decided that such a place as this–a place that would reject what Mom had devoted her entire life to, including years of higher education, and much of her own weekly pocket money—was no place for her kids.  Mom packed up her cardboard boxes, full of washed yogurt cups and magazine clippings and half-dried bristle brushes, her moist clay and her own potter’s wheel, and sadly closed up shop.

Yet somehow, in this atmosphere of intellectual penny-pinching and down-sizing, Mom considered herself lucky.  Whole foreign language departments had been shelved, as if no language but English had ever existed.  And the music teacher at her school was reduced to a state of pitiful penury, exiled from her spacious music room (which had become the computer lab) and doomed, to push a cart around from classroom to classroom, peddling her wares.

With Dad gone and Grampa off to greener pastures, Aiden began to read, and voraciously.  He found himself listening for the sound of Dad’s voice, or a turn of phrase that was uniquely his.  He found himself perusing automobile magazines, plumbing quarterlies, and treatises on facial hair management.  And the best place to find such materials, thanks to Andrew Carnegie, was the Embly public library.

Aiden and Sam reached the top of the steps, panting, ready at last to enter the sacred –and air-conditioned—space.  They had climbed up the fifty steps in a 90-degree cloud of muggy, thickened air.  Aiden stole a glance and noticed, that Sam’s carefully-applied flourish of eyeliner was starting to bleed, ever so slightly, at the edges.

“Lunch first, remember?” Miss Carol yelled out to them, in a scratchy voice.  She was already at the pavilion in the adjacent park, and Mom trudged there determinedly, with her heavy grocery bag slicing into her shoulder.

Aiden and Sam, who were mere steps from entering that cool sanctuary, sighed, and trudged back down to join the others.  Mom was already unpacking.  Mandarin oranges and grapes, of course, things you could throw down your throat, if necessary, and sandwiches, wrapped in beeswax squares, reusable and sweet-smelling, with antibiotic properties, apparently.

Mom hated plastic.  She hated the whole notion of overconsumption and its guilty cousin, recycling.  To use something made of one substance, and then to collect it, so it could be used again, transformed, into a totally different shape, and used for a different purpose, she found wasteful.

Mom did not like wasting anything. Not money, not energy, not time, and not, in this case, glass, aluminum, or plastic.  She bought things without packaging, whenever she could, though it seemed to get harder with each passing day.  This meant going to farmer’s markets, not stores, for the most part.  And not getting intricately packaged toys for Christmas.  Not that Aiden really cared about toys anymore, at his age.

Waste not, want not, she said.  But Aiden still found himself wanting.

The sandwiches were good, as usual.  Mom could do wonders with turkey or ham and a few veggies.  She made the rich, five-grain bread in her cob oven in the early morning, before the fire rangers, in the national forest nearby, would be on the lookout for smoke.

Aiden noticed his friend Evan’s pitiful peanut butter and jelly on floppy white.  Sam ate nothing, as usual, but in seconds flat, sucked down a cool, sweetened coffee drink, in a tall thin can. She aimed for the metal garbage can’s opening and sent the can sailing.  It landed inside, with a satisfying clang.

Mom collected the beeswax squares, wiped them with a wet rag, and stowed them away.  Desert was not on the menu, though Aiden and Alvin both watched longingly, as Evan devoured a sleeve of sandwich cookies.

“Do you ever think you’re going a bit too far, with this back to nature thing?” asked Miss Lilly, laying a tentative hand on Sam’s black braid, before receiving a hostile look. Sam raised herself in a huff from the picnic table and began to walk a nearby path, with great speed and deliberation.

“Not too far, Sam!”  Miss Lilly called after, half-heartedly.  “They’re so hard to control at this age,” she complained, seating herself opposite Mom at the picnic table, in Sam’s seat.  Mom busied herself with her half-eaten lunch.

“Control is an illusion,” Mom muttered, between bites.

“You can’t harness moving water,” Mom continued, cryptically.  Sam returned to the bench and her eyes widened with interest.  Aiden was used to this backyard Buddhist nonsense.

“Well, technically…” Miss Lilly interrupted.  “Isn’t harnessing water what a mill does?  Or a hydroelectric dam?”

“She means with your hands, Mom!” Sam burst out.

“Or a harness,” observed Evan.  If, in fact, anyone at the age of eight showed signs of being a budding engineer, it was he.  Mom’s elementary school would’ve loved to have gotten their hands on him.

Miss Carol sat down near the other end of the picnic table, close to Aiden.  Too close.  She smiled a toothless smile, but only on account of the fact that her mouth was closed.  Sandy was spinning in circles nearby, his blond ponytail fluttering horizontally behind him.

“Yes, I studied Buddhism in school, too.  Religious studies, actually.  So much to be learned from Eastern cultures, don’t you think?”

Mom stared at her, as one stares at a person who does not realize what they have just stepped in.   Waiting, for them to realize.

Silence.  Mom filled the void helpfully.  “I just mean that kids can’t be brought to heel.  They are blessed with their own thoughts and ideas and of course, they are going to act in ways that we don’t understand, and don’t approve of.  It is in the nature of the glass to break.  Of course.”

Miss Carol cocked her head to one side.  “I do agree on one point,” she said.  “Children, most certainly, are blessed.” She held her palms silently before her, with closed eyes, then settled down to eat from a plastic storage container.

To read a poem, encouraging us to meditate in and commune with the Great Out of Doors, read Take Steps. To read a very short story about a book shop that is so many things, besides just a place to store books, read Book Worm.