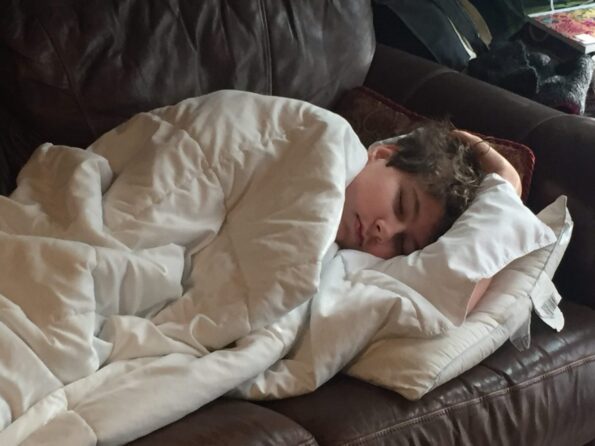 This is the time of year when we snuggle under them, wrap ourselves in them, tuck old and worn ones under our favorite shivering pets, cover our legs with them, ready for an invigorating sleigh ride.  And rumor has it, some of us even knit them!

I am not such a one.  The closest I ever came to knitting anything was the front panel of a pullover sweater.  It was significantly wider at the waist than at the shoulders, and full of rather inartful gaps and snags.  It was a labor of love, and I keep it still.  But no one would call it “clothing”.

The only reason I tried knitting was because I noticed that, during my ten-month stay at a German university, so many young women kept busy with their needles all through those interminable lectures.  Somewhat less interminable for them, than for me, since they probably understood most of what was being said.  But as soon as the truth came out—that I could not knit, that I had never knitted, that I had never even had the slightest interest in knitting, in my twenty odd years of existence—well, then I became a charity case, and all the women who could knit between 15 and 85 felt it was their duty to instruct me.

You can understand why knitting, and blankets, for that matter, might be popular in a place like Germany, known for fairly cold winters.  (Although I cannot vouch for the fact that it is still popular, since my brief knitting experience was easily thirty years ago.)   I had the most wonderful night’s sleep during winter break in Germany, windows wide open for fresh cold air, snuggled deep under a feather comforter.  Germans do know how to do blankets.

Here, though, in Florida, the popularity of warm things: blankets, sweaters, shawls, scarfs… Well, it boggles the mind.  We are rarely given more than an instant of chilly weather at a time.  It is now absolutely gorgeous here, with clear, dry, sunny, room-temperature days.   I prefer the weather we had last week.  Nippy, even cold, at least for a Floridian.  You needed a jacket.  And that is not something you can say every day.

Despite the fact that most Floridians could survive the year just fine, wearing nothing but a T-shirt and shorts, hoodies are very popular and will be worn at the slightest provocation.  Long pants, especially heavy jeans, are the uniform of the teen set, just as they were in my youth, several degrees of latitude further to the North.  Girls and women encase their necks and shoulders in thick donuts of scarves as if guarding their tender skin against renegade snowflakes.  And velvet dresses and thick woolen coats make an appearance in the doorway at every Christmas party, if only to be shed immediately, and left in the bedroom with the purses for the duration.

So, I suppose it shouldn’t surprise me that children, too, long for the comfort of a fabric embrace, the peace and calm offered by a security blanket.  We went through four.  Some had to be clawed away, or hidden, from kids entirely too old to be seen dead with them.  Some were gladly replaced with other cuddly items considered more suitable and age appropriate.  I would always rue the day when the blanket was not washed in time for bed. And I would always smile when the blanket calmed the worst tantrum, soothed the most passionate complaint, put the most sleep-deprived little monster out, like a light.

To Lock Out the Storm

Well, it was a security blanket, of sorts, that I was seeking this week.  Seeking and not finding, at least not immediately.  Winter break, with its release from the shackles of routine, seemed like the perfect time to sit down and attempt to improve the security (or at least the apparent security) of my blog.

That’s right.  I was going to install an SSL certificate.

Now, it is not completely clear to me what the acronym SSL stands for.  And don’t tell me I could Google it!   Several possibilities spring to mind, only a few of which I could share on a “G-rated” blog, such as this. Subtly Suicidal Legerdemain, for one.  So Stupidly Lengthy for another.  Simply Sorcery (Best) Left (to professionals.)  You get the picture.

All this trouble, for a little padlock.

No Such Thing as a Free Kitty

The short version is, I found out you could get a free SSL certificate on WordPress.  So, I went to my hosting provider, clicked on it and found out, nope!   I needed to upgrade my CDN service. (Can’t Do Nothing??)  So, I changed it –it was not lost on me that the SSL was no longer “free” at this point!  But I learned long ago the hard lesson, that there is no such thing as a free kitty.

One minor glitch.  To use that CDN service, my site security service would also have to be upgraded.  It was no longer enough to locate malware:  the malware had to actually be dealt with in some way.  The fact that I thought they were already doing something with it is not the point.  As a result of this upgrade I incurred a significant charge, but there seemed no other way.  I bit the bullet.  I was hardly feeling more secure at this point, with a bullet in my mouth.

Oh my… goodness!  (Trying to keep the G-rating here!) All of my beautiful tiles on my landing page were folded on top of each other into an unreadable heap!  Clearly everything was not ok.

I called in the big guns.  I picked up the phone!

This is definitely not sounding like a bedtime story so far.

My hosting provider advised me that it was probably a plug in. and so I had best go plug and unplug all of my plugins one at a time until I found the right one.  Being a mid-twentieth-century baby, I could only imagine the agony of pulling the plug out of each electric socket in my whole house and plugging it back in.  I don’t even have the patience to go through a strand of Christmas lights to find the duds!

I managed to keep the rather reluctant tech support on the phone and pointed out that I had not added any plugins recently, and that everything had occurred immediately following the install of my SSL and security updates, all of which I did through the hosting site.  The tech guy agreed to reinstall the SSL but I would have to twiddle my thumbs for another 24 hours before it would actually take effect.

Everything is so much faster, now that we live in a world of instantaneous communication!  I mean this sarcastically.  The waits are not shorter, only more inscrutable.

I put my poor broken site to bed for the night, and woke early the next morning to check the progress.  Nothing.  24 hours gone.  Still nothing.

You get the picture.  This has essentially been my last three days.  Full of the Christmas spirit, if by Christmas spirit you mean cursing under your breath and wishing you had taken up another career, preferably in the tech field.

My son, the budding tech guru, did briefly come to my rescue.  He has already perfected his reluctance skills, which apparently are highly sought after in the field.  He assisted me in deciphering various terms (jargon and acronyms aplenty) and figuring out which buttons to click, on long registration menus.   For a process that is supposed to improve your security, they certainly do ask for a lot of information!  But the site was still only partially working, by the time he gave up.  He’s a programmer, not a web designer, he likes to remind me.  As if one’s time could be better spent eating dirt.

Well finally, today, a miracle happened.  The most beautiful Christmas Green popped up on the search bar, triumphantly proclaiming the site “Secure”.  The awful red exclamation point disappeared from my WordPress admin bar, as if making way for the Star to rise in the East!   I then plugged my naked babe of an un-http’d URL into Google.  And it took!   There, next to my site name, a padlock appeared.  I thought I heard an angelic choir.  At last my site was protected!  My naked babe had swaddling clothes!

Don’t ask me how it happened, or whether this Christmas miracle will last beyond tomorrow.  But it goes to show, to what length we will go, just to have a security blanket.