You are here: Home / Let Bygones be Bygones:Archives / Blogposts of Yesteryear / Through My Eyes
October 18, 2017 by Andrea LeDew

One of the common beliefs about people with autism is that they see things differently.

Temple Grandin, the world-renowned celebrity and architect of livestock facilities and contraptions, who also happens to have autism, has often said that she thinks in pictures.  Rather than having a method of sorting through thoughts verbally, with one word leading to another, she describes an inner visual catalog of movies.  It reminds me of an online photo album, with software that recognizes the similarities in images.

Photo Album of the Mind

For instance, if you heard the word “church”, a dozen examples of the word church would spring to mind, visually represented alongside one another.  And you would narrow down your conversation-partner’s meaning by comparing these images, one by one, to the one you are speaking about.

I imagine the same could be done with non-concrete objects, feelings, or ideas—a visual representation of that experience would come to mind, along with that of all similar instances, for sorting and referencing, to make sense of what lies before you.

We all probably think this way, to a degree.  Especially when things are unfamiliar, or threatening, or surprising.  I can recall feeling shaken up after being rejected by a love interest, for example.  When something happens to you for the first time, you search your memory frantically, trying to locate a similar event in your life, something that can help you make sense of your present quandary.

These are not words, but experiences, you are sorting.  You are picturing the last time you felt this way, comparing it, seeing if it fits.  Talking to others about their feelings and experiences gives us additional pictures or movies to add to this collection of “felt” experiences.

I have often heard that visual thinking is typical among kids with autism.

I wouldn’t know how to find out whether this is true with my own child. He rarely speaks to me.   It is unclear why:  Is it because he is a teenager, or because he chooses not to talk to me, or because of some difficulty in forming thoughts or words, or processing them?

I do know he can type long involved stories or screenplays effortlessly.  He has been quite talkative during various intervals in the past, and he does occasionally recite scripts from shows he has created, so I know the words are there and he can use them.  At least he can, in certain contexts, should he choose to do so.

It seems to me, that there is both a volitional component (wanting to talk) and a contextual component (being selective about where, or when, or about what or with whom you talk,) as well as, possibly, a mechanical component (finding that talking is just too hard for some reason.)

For example, my son will tell me, in no uncertain terms, when he wants to see a new movie.  He will even tell me the time and date that we must go.

But if I have a question, and I try to draw an answer out of him, I am lucky to get a yes or no.  I definitely can’t expect to get, from his own lips, any insight into the way he thinks about things.  At least not for the time being.

In that same first chapter of Thinking in Pictures, Ms. Grandin says children with autism who are less able to express themselves verbally often think in associations.  One thing or thought leads to another because it is related.  Much like correlation and cause and effect in the realm of statistics.  Both are important and informative, but they are two very different things and may lead you to differing conclusions.

Lacking confirmation from the source, I find it interesting to try to speculate on my son’s point of view through his artwork.

My son began attending an art therapy class about six months ago.  Despite the fact that it requires getting up out of bed, and putting on shoes, he seems to rather enjoy it.  I am not there during the sessions to observe, nor would I want to pry into the “therapy” portion of this activity.  Like all teenagers, my son values his privacy.

But I do occasionally catch a glimpse of his artwork, and I like to think it speaks to me.

The piece above is a simple activity, done by elementary and preschoolers everywhere. Blobs of paint on a paper, folded once, and opened for a surprise.  I recall making butterflies this way.

But I can’t help but feel that his eyes are staring out at me, from this particular Rorschach-type inkblot.

They have been studying various artists as they go along and among them have been Jackson Pollack: 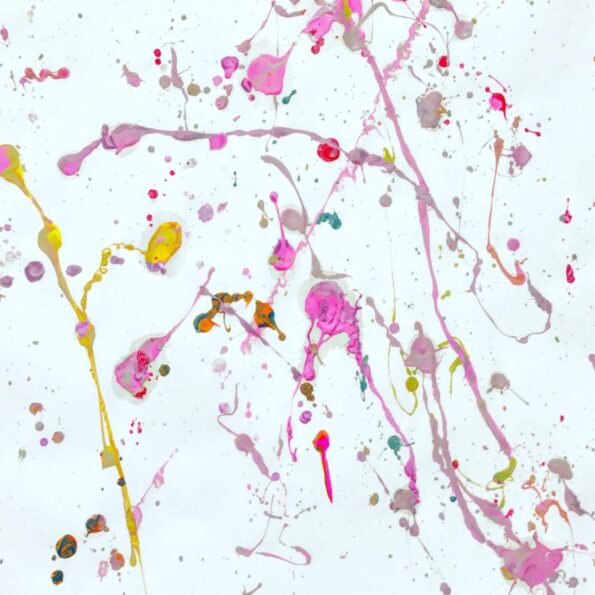 Miro (this was a joint project with another child): 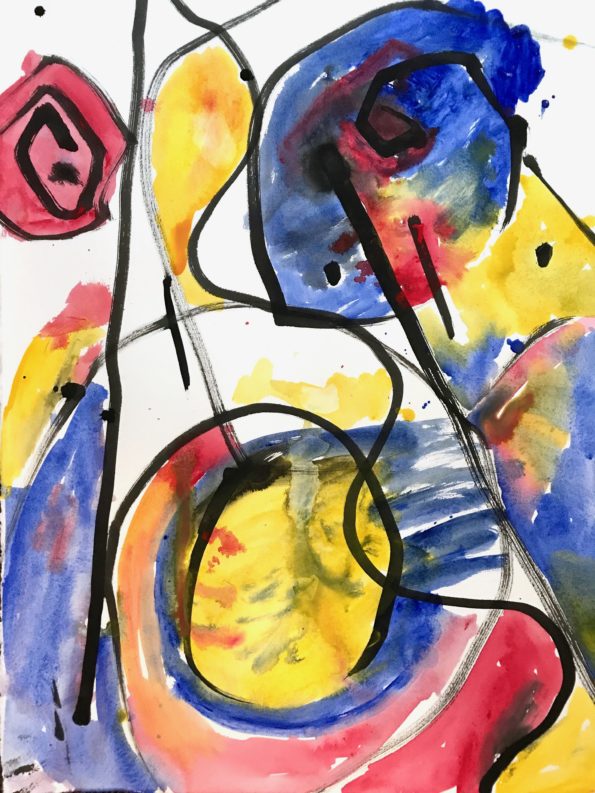 And some others I am not familiar with.  In addition, they have worked on “mark-makers” or various sorts.  In other words, what kind of things can you use to make marks on paper?  This is just one example of this, including hand prints and drippage.

Alternative mark-making is especially valuable when the artist’s fine motor skills are weak or somehow compromised.  So many of our value judgments about art have to do with precision, and those whose strength is not in their ability to draw precisely from life have a definite disadvantage, although their creative impulses may be no less strong.

At home, my son’s creativity is often expressed through food or crafts.  He likes to pair unlikely foods, or add flavorings such as vanilla to beverages like milk.  (For this reason, the milk lives in our bedroom in a cooler at night, and the vanilla in my top dresser drawer.)  He also likes to make dips of various kinds.  I recall one involving ketchup and chocolate syrup! 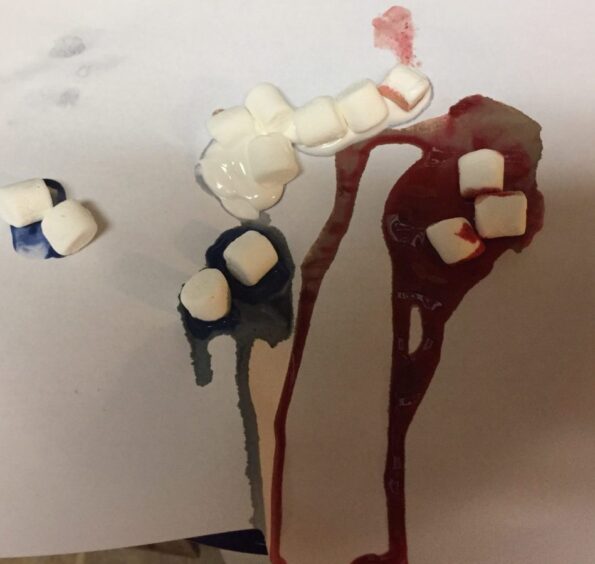 This picture shows both types of creativity.  It reminds me of the food sculpture assignment my daughter had to create in her arts-focused middle school.

What these say about my son, I’ll leave to you to guess.  But it is entirely clear to me that creativity is an integral aspect of his being.  I even remember him complaining to his Math teacher in elementary school that he didn’t like Math because it was not creative.

I think it is important that we foster this spirit of creativity in children with autism in every way we can.  Who knows what surprises lie in store for us, when we unfold the page?