You are here: Home / Let Bygones be Bygones:Archives / Weeks Like That
April 12, 2017 by Andrea LeDew

Every week has its own joys and sorrows.  But as we head toward the end of the school year, or at least the official public school year, we homeschoolers often end up scrambling to get the rest of the work done.

Whether dictated to us by state standards, or by a book on what every child should be doing by the end of each grade, or even by the silent, but knowing looks of non-homeschooling members of our families, by April there is sure to be some bar we have not yet passed, some mountain we have yet to climb.  And so, we begin to scramble. We make a last-ditch effort to recover what time may have stolen, in the blurry haze of day-to-day.

Last week was such a week, one that somehow ended before it had begun, leaving me wondering what happened to the time.  The week seemed promising to begin with.  One day, which would normally have been hijacked by our homeschool co-op, was now ours to spend as we pleased.

Monday passed uneventfully, but Tuesday involved a major technological problem: my son destroyed our four-month-old computer monitor.  Was it an accident?  Well, I’m sure he lost his temper without meaning to.  And he certainly expressed remorse afterward.  He pushed the monitor back on my desk and it fell hard enough to form those lovely multicolored spiderweb cracks of light in the screen display.  Ruined. 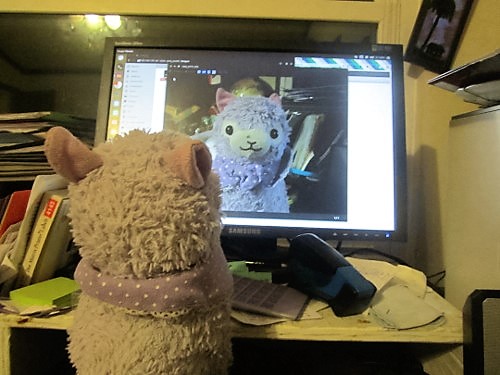 Naturally there had to be consequences of some kind.  With my son, consequences have always been a bit of a sticking point.  Technology is his lifeline, a kind of security blanket for him.  Yet it is a love-hate relationship at best. Although it may seem short, we settled on a week without the computer.  A week seems like years in my son’s world, in my world, for that matter.  For I am the one who suffers, as much as he.

We replaced the monitor immediately.  We had no choice:  tax time was only a week away!  In a way, my son’s hiatus from the computer could not have come at a better time.   But the comparative silence of the next seven days, as I worked away at my taxes, was riddled with constant questions about when the computer would again be available.  Could he use my smartphone?  Could I help him charge the battered and broken tablet?  And the ultimate claim that we all know and love: that there is absolutely nothing to do in this house.

I had other things on my mind.  At the end of the week, on Friday, I was scheduled for a second opinion on an upcoming surgery.  That worried me enough, the prospect of yet again being told to wait.  I have been living in a state of limbo for more than six months, having trouble walking any distance, and living on willpower and ibuprofen.  But I was nervous that Friday would bring only bad news.

Lessons?  Lessons?  What were the lessons of the week?  Perhaps, number one, do your taxes early.  Number two, it is important to be gentle with technology.  Number three, life does not wait for us to get done with our homeschooling first.  It comes upon us, full throttle, and we need to jump on or jump out of the way.

Well, Friday finally came as an absolution.  Awash with relief, after visiting the doctor; surgery date clutched tight in my hand like a precious jewel; I finally had the presence of mind to notice the fine spring weather, and to think about what we had left to do.  I learned this week that it pays to be persistent.  And my son learned that it pays to be patient.

Now I need to get off the computer.  It’s his turn.

Previous Post:One is Silver
Next Post:An Autism-Friendly City: A Sensory Garden for Parents