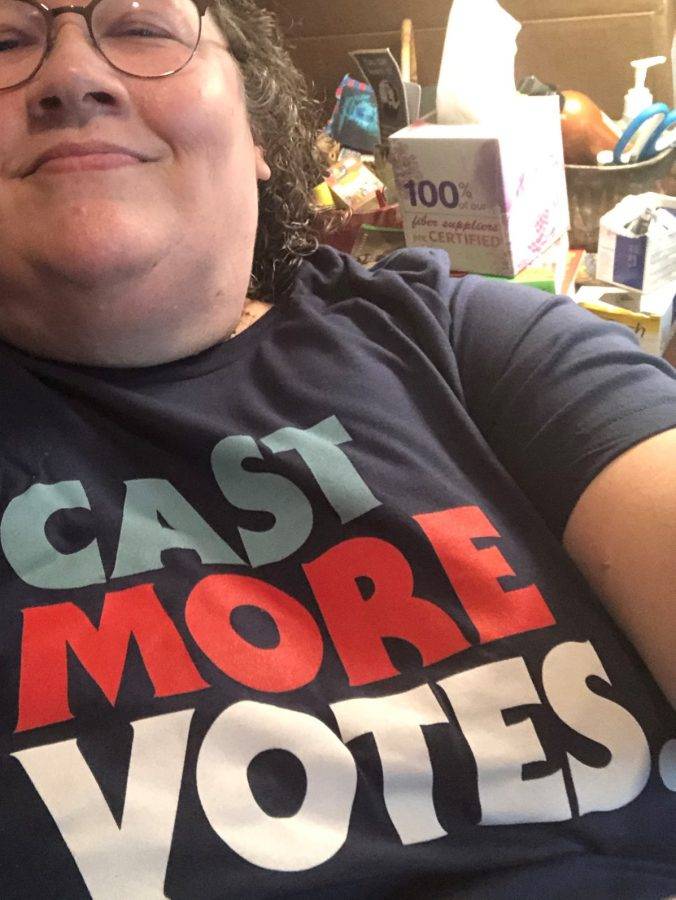 Who Owns My Vote?

This Election Day 2022 poem attempts to determine ownership of a very valuable commodity: a person's vote.

I came up with this poem on Election Day 2022, as the Midterm Elections in the US began to blanket the morning news. The photo is of me in 2020 with my Bitter Southerner t-shirt, urging everyone to cast their vote.

One odd thing about this election is the number of people running, who seem to question the very system that allows them to gain office.

The idea of overturning the 2020 election, as some seem eager to do, is problematic to me for one simple reason. I can think of no one who holds the power to take away a vote from a person, once they have cast it. Does each voter somehow relinquish ownership of their own vote with the very act of voting, so that the outcome is now subject to manipulation or second-guessing? I think not.

I think a redo would require the consent of all the voters, especially all those who voted for the eventual certified outcome. The noise about questioning the 2020 election, at its heart, relies on the assumption, that a vote, once cast, belongs to whoever is in power, to do with as they see fit.

This poem is an attempt to answer the question once and for all. Who does a vote belong to?

Be sure to use yours.

I held it last

Minds now use the letter.

Who gets to draw

The hem and haw

I vote for this–

And roil the waves;

Who dictates to me

I exercise this fragile right?

Who gets me up

And gets me dressed

And guides my feet–

Who makes me wait

In lines when I

Should be at work

Who insists I wait my turn?

What man can change it

Can make my ballot moot?

To some golden boy,

Some group? Has all

Have wives not cast

Their votes to cancel

Who owns my vote,

I ask of you. Is this

A hazing I go through,

To show that I

What power can change it–

And on a whim,

No man can do this.

I make the choice–

What every citizen should do–

And none corrupt us,

We sing one song.

For a look at 1/6/21 shenanigans from a rioter’s point of view, read Great Patriots 1/6/21. For a grim but concise look at the Electoral College and its intended misuse, read Electoral. For the cry of a sore loser stomping his feet, read Stolen. For other political poems and my buildup to the 2020 election, checkout my hashtag Election